From It Lurks Below Wiki
Jump to: navigation, search

Where it all begins.[edit | edit source]

The surface of the world of It Lurks Below. On world creation, some

Iron Ore usually spawns such that it is accessible straight from the surface. This layer does not refresh when using the World Book, and so it is advisable to not waste resources found on this layer. They are sold at the

General Store , but only in small quantities and buying from the store is cumbersome and costly. Trees are a sustainable resource of

Wood , granted you do not dig up the saplings and forget to replant them.

On the surface, there are two biomes: Normal surface and The Corruption of It. At night, monsters spawn around the surface. However, after you defeat

Commander Vile , they will no longer spawn. On the other hand, there is a small chance that at any time an Invasion will happen, spreading IT's corruption and making your NPCs temporarily inaccessible.

Commander Vile is the first boss in It Lurks Below. He is found in The Corruption of It biome on the surface. Defeating him is part of the Tutorial Quests. 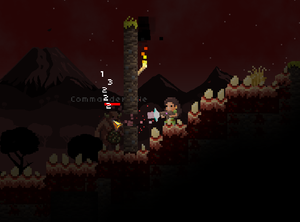 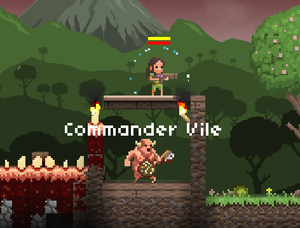 Commander Vile drops a random quality weapon on death, proportional in strength to the player's level.