From It Lurks Below Wiki
Jump to: navigation, search

The second layer counting down, just below the Dirt Layer and above the Ice Layer. Contains

This area is relatively easy as long as you come prepared, monsters would usually appear in the Ochre Calcite Mini Dungeons around the Layer in pretty large groups, but not outside of them, so take that to your advantage to get the copper armor before things go down hill.

You will know when you find the boss dungeon because it has a different background wall than the other mini dungeons that were to be found, these type of dungeons contain a huge amount of the highest level monster in the whole layer that spans across the entire map with occasional named monsters, which is a death wish to go without copper armor, or a good weapon drop from this layer.

The most common block in this layer is

Muddy Dirt , with a middle layer of

Muddy Dirt and a background of flesh walls. There are also patches of

Rough Stone . Dungeon walls are made of

Ochre Calcite and background block for the boss dungeon uses

On Normal Difficulty, the only ore in this layer is

Copper Ore . On Nightmare Difficulty, the common ore is

Cobalt Ore and the rare one is

Bronzed Ore . On Hell Difficulty and beyond, the common ore is

Crimson Ore and the rare one is

Gath'ack the Soulgazer is the second boss of It Lurks Below. He is found in a dungeon at the bottom of the Muddy Layer after the player receives the quest "It calls from below".

He has three attacks. In order of damage from weakest to strongest, they are: small projectiles that go from his body in a ring, a large projectile, and a beam that causes block destruction. In Nightmare, Gath'ack increases speed and fires the eye-beams in a random, star-like pattern.

Note: Bosses are the same level as the monsters found outside of their room. 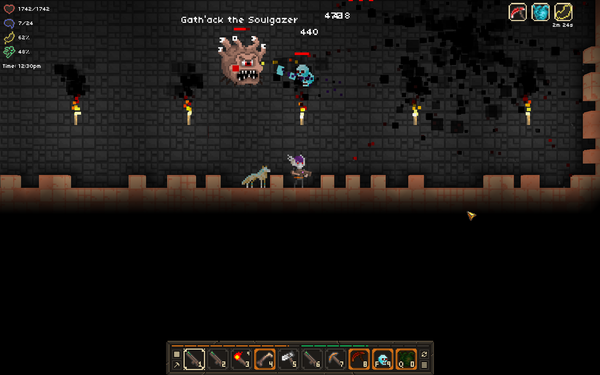