This page will be about in-game events, such as the Halloween event or the Harvest event.

At all times, there is a small chance that the surface will be invaded by a horde of monsters.
Until all invading monsters are defeated, all shopkeepers will disappear.

The following monsters will appear above the corruption:

During the event, you can collect a new currency,

Pumpkins . The event currency drops from monsters, chests and bosses. Drop rate is affected by gold find. The drop rate increases the more difficult and deep the player goes. Mobs have to be with in experience giving range to drop pumpkins.
Pumpkins are used to purchase items from

The Hag of Halloween NPC.
This NPC is located in a separate "world", accessed through a special Halloween item, which is given to the player when completing an event quest.
Notable items sold by the Hag are

Special Halloween Brew s, which let you summon the special

Dread o`Lantern boss. Currently the only boss to give you information about how much damage you dealt to him. When beaten, he always drops

Ring of Dread's Demise , or

A single quest is provided by Jack. A large jack o lantern located on the second floor of the Wizard of Space and Time. 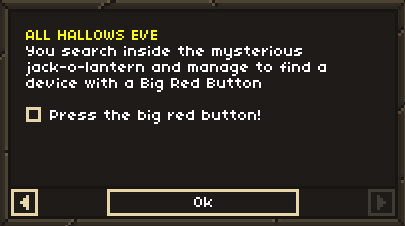 During the event, you can collect

Harvest Maize . Which grows wild around the The Hag of Halloween's hut. Players can harvest the maize and create Maize Seeds to grow as a crop in town. Maize Seeds grow in spring, summer and autumn.
You start the event off with a quest (Mysterious Egg) from

The Great Gobbler . This NPC is located in the Trusty Bank. 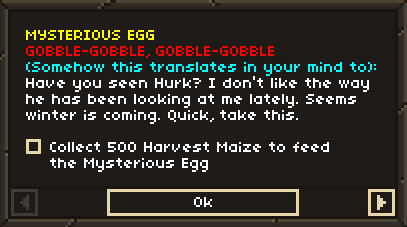 On completing this quest the player is rewarded with

During the event, you can collect a new currency called

Snowflakes . Snowflakes drop from monsters, chests and bosses. Snowflake drop rate is affected by magic find. The drop rate increases the more difficult and deep the player goes.
You can buy items such as the Holiday Set Runeword Recipes from

Jolly Ol' Graybeard . This NPC is located in town.
Every day a  Holiday Spirit boss will appear over the corruption. When defeated, it always drops a